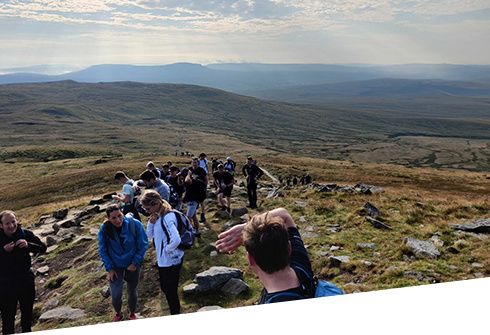 We got underway about 06:00am headed for Ingleborough, where the early energy and breathtaking sunrise helped us up the 1st peak relatively easily. The quick and steep drop down the far side towards Whernside made it feel like we were making good progress.

After a quick refuel we hit the 2nd peak which proved the biggest challenge of the day personally. It seemed to take forever to reach the summit, and each step seemed to be harder and harder to come by. Eventually, a bit behind Romy and Adam, I reached the top and breathed a huge sigh of relief.

The long and steady decline towards the stunning Ribblehead Viaduct provided a new lease of life, knowing we had already completed 2 of the 3 peaks. That provided a false sense of hope, as in reality we still had half the distance to walk.

After a brief stop for lunch we started the long, never-ending path to Pen-y-Ghent. The longest slog of the day by far, it just never seemed to get any nearer! And then the rain came. A torrential downpour, with many hours and many miles still to do, did little help to morale. Each of us were starting to hurt and by this time any hope of a quick time evaporated.

Finally, we hit the climb of the 3rd peak. As tempting as the shortcut back to the start was, we went for it, finally reaching the peak by about 16:45pm. The weather was still against us and the gale force winds that battered us on the difficult and steep climb down, provided an extra challenge for us.

The steady walk back to the village was all that remained, as we finally reached the end point at 17:20pm. In total it took us 11h23m of which we were moving for 9h23m and a massive 57,000 steps!